Sassafras Sassafras albidum (Lauraceae) HEIGHT to 20m
Medium-sized, columnar, deciduous tree. BARK Thick, reddish-brown, furrowed and aromatic bark. BRANCHES With thin, green shoots, particularly evident after leaf-fall. LEAVES Mostly elliptic and untoothed, to 15cm long and 10cm across, but sometimes with large lobes on either side. Upper surface is bright green and lower surface is bluish-green; leaves turn through yellow and orange to purple in autumn. Crushed leaves have a pleasing smell and to some they taste of orange and vanilla. REPRODUCTIVE PARTS Male and female flowers are very small, greenish-yellow and without petals, growing in small clusters on separate plants and opening in the spring. Fruit is an ovoid berry, about 1cm long, ripening to a dark blue. STATUS AND DISTRIBUTION Common native tree of E North America, growing in woods and thickets, and used as a raw ingredient for root beer and tea. Seen in Britain and Ireland in arboreta and well-established gardens. 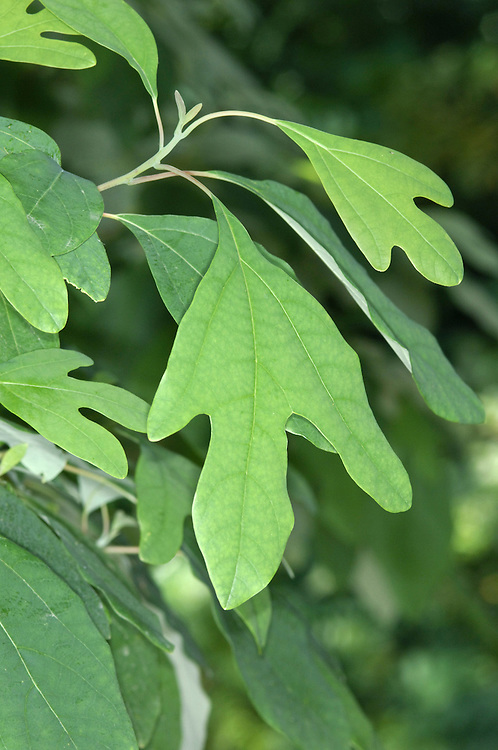